These speakers have been seeing daily use in the ZOG lounge-room, are essentially complete, and continue to sound great.

three small upgrades done since the completion have been:

One small bit of experimentation done was to add some Selenium/JBL ST200 supertweeters. This was to get a bit more high end above 10khz without relying on extreme miniDSP frequency boost to try and push the higher end. They have been added to sit next to the main waveguide on rough and ready L-shaped stands. A simple capacitor has been added to bring in the ST200 above 10-12Khz using a basic first order crossover. These are not particularly expensive or “high end” devices but the specs are a good fit and they have been left in the system now for 4 years as they sound OK. 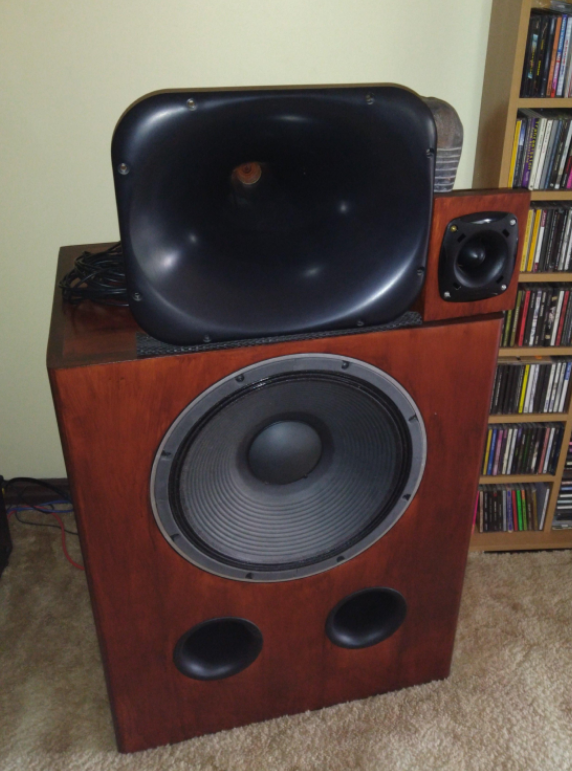 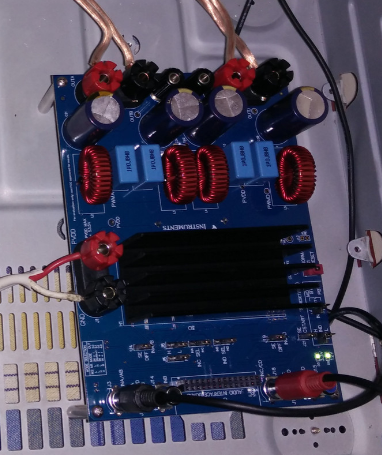 This was a quick build using another “found object” enclosure – from an old busted home theatre amplifier kindly donated by a StereoNet.AU forum member.

At the time the Texas Instruments TPA3255 Evaluation board was on special so I ordered one and made a quick, but functional amp build using a Meanwell LRS-350-48 switch mode power supply. This has turned out to be a great amplifier to drive the Lorantz bass drivers, so has been left in the system.
I haven’t bothered documenting this build too much, and building the amp from the evaluation board is fairly straight forward. There is masses more information in threads like this in the DIYAUDIO.com Class D amplifier forum.

The miniDSP “classic” crossover has been working great for years but always had a few annoyances. The more recently released miniDSP 2×4 HD looks like it addresses a lot of these issues so I got one and upgraded to it recently.

One initial issue is I could not copy over exactly my old config. They are quite different devices. Although most of the settings can be copied over by putting the two configs side by side and working through them, the biquad filter definitions do not copy over directly as the miniDSP HD has a 96Khz sample rate, while the older miniDSP has a 48Khz sample rate. But it turns out just “eyeballing” the resultant EQ curves and making ones that matches as closely as possible using basic filters gave me a miniDSP 2x4HD config that measures almost exactly the same as the old one, and sounds pretty good.

eyeballed config and previous config, back to back measurements at about 2M on axis: 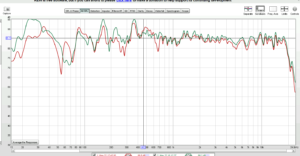 A later project if I feel like it will be making a new miniDSP HD config from scratch that takes advantages of the additional features provided by the better software and CPU in the new device.

Also I don’t need to use intermediate preamps any more to boost levels – the miniDSP is plently loud enough to drive the amps and loud volumes. But it is a bit noisier than the previous setup with the TDA7297 15W “lunchbox” amp – preamp “hiss” audible within 1M of the waveguide, though not at the listening position. The noise levels however are quieter with the JLH 1969 Class A amplifier (different gain settings). So still usable, but not as quiet as the old one, but the two volume controls on the old one caused usability problems.

The remote control volume/mute button and 4 selectable saved configs is also handy, so I can switch between configs suitable for different amplifiers without getting the laptop out.
I got a small 12v linear PSU to drive the miniDSP just to power it with something a bit cleaner than the wallwart it came with, though this PSU made no audible difference to the hiss levels,