The last post on MIXXX I made is now out of date, so here’s what I’ve been using recently, as since the MIXXX team are releasing .deb files of their nightly builds, I’ve been trying them instead of the self compiled version. 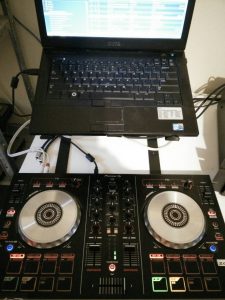 I tried later versions of MIXX, up to what was available until the end of December, including the 2.1 Beta, but I was getting crashes, so fell back to this version which has been rock solid. Once some important gigs are over I’ll return to the current versions and help the MIXXX team debug, but right now I need a stable version for an important gig.

Last year I upgraded from my trusty Numark Mixtrack Pro and got a Pioneer DDJ SB2. I got this primarily as the mapping has nearly all the controls working with MIXXX and it’s Linux compatible. So far this has been working very well for me. I got the unit from local DJ gear retailer DJ City.
Most of effects are still a bit naff, but thats more a MIXXX software issue which I hope will get better, but the filter mode works great.

It seems there is a “line in the sand” of functionality in DJ controllers as only a certain amount of on-board circuitry can be powered from the 5V USB port on a laptop without an external power supply, the DDJ-SB2 is about at the upper limit of what is available without an external power supply adding complexity, it would be nice to have XLR balanced out, but the cost would be the extra PSU to deal with at gigs.

I have found going direct into some amps with the DDJ SB2 sounds a bit crunchy, like there is some kind of mismatch, but using DJ mixer or other preamp as a buffer helps here.. and in reality in most “real” live situations its going into a mixer of some type.