Found a broken Roland SH-101 on Gumtree. Couldn’t believe my luck!
I was hoping for a simple fix, maybe a dodgy power switch or something. When I started to investigate it soon became apparent that someone had been there before me. The T1 transformer, which does DC-DC conversion from the 9VDC plug pack to the various analogue stages was missing! Also, the surrounding components had been lifted out of there solder pads. This wasn’t going to be a quick fix! 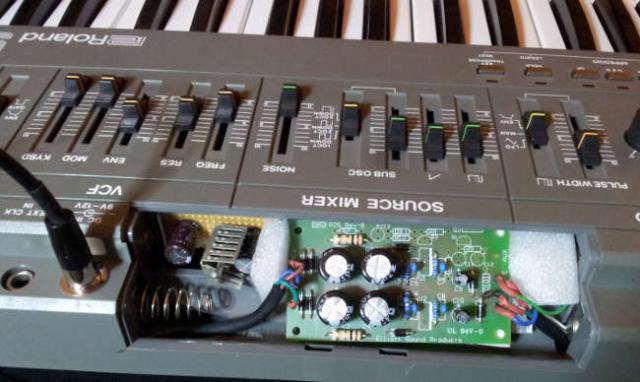 Searching around the net and it was becoming obvious that this problem was fairly common but with no one having fixed it! Also, the T1 transformer is not available for purchase anywhere. My only option was to work out what voltages the T1 Transformer was outputting and to try and replicate them. After a post to the awesome Muff Wiggler DIY forum and a bit of discussion I decided to have a go at making up a power supply to provide the 3 power rails +18.5v, -9v and +9v. That should do the trick.

Looking around the spares I have on hand, I still have a few of the excellent Rod Elliot ESP project P05b power supply kits and even had one readily made that could be used for testing. These use a pair of linear regulators LM337/LM317. With a bit of reconfiguring by changing some resistors I soon had the two main rails +18.5v and -9v and of course the 0v ground reference. Applying these voltages to where the T1 transformer secondary outputted it’s power and plugging in the +9v plug pack and hey presto the SH-101 was back to life!

I had to miniaturize the fix to get it all to fit into the battery compartment and also had to add an extra +9v regulator board to remove the old plug pack. Now the whole thing is running off of a Behringer PSU5-SAA (from a UB1202 mixer). I also removed the 9v input socket and replaced it with a mini-XLR that had the 3 required connectors. This is basically the same as any of the small Mackie VLZ-X03 mixers. Iv’e semi-documented the fix with photos in the Gallery.